Claripirate specializes in extremes other devices shy away from.

Don't hesitate. I will take this one to the grave with me with a contact mic strapped to my rattling bones so the soft sweet sounds of my decaying corpse echo into the timeless void of the afterlife. I've owned a variety of mid-fi pedals over the years and can't say enough good things about them. Quality build, lots of fun, and Doug has always been a great guy to work with. You won't be disappointed.

S
Scott Helsley
You need this!

This pedal can do it all. Nice delay and modulation for your saturday night new wave/80s club gig. Then sunday morning you can take it to your church gig and then you can down some edibles and get as weird as you want at home all afternoon. This pedal can do it....from playing it straight to super weird.

D
Davey Lynch
Is it Lunch time yet?

Don’t spend another minute reading this garbled nonsense! Magic man Mid-Fi will set you up straight. It took two tries and five dimes to finally find the tic box for my big toe. Leaving all the other toes behind. To fend for themselves. With a shoe short of a show in the rain- I can’t complain.

Do you buy pedals only after exhaustively watching and rewatching YouTube demos? Me too. Did that for this one...knew EXACTLY what it did...and yet still stood there with a confused frown on my face on my first plug in.
Why?

It's like falling in love with a beautiful face, then discovering it's made of wax and putty stuck to a deep-pile carpet.
At first, you're kinda repelled as it feels weird and isn't something you've ever touched or played with before. Then you start prodding and pulling it with some sort of semi-disgusted fascination...reshaping, reforming, pushing depths and pulling peaks where they really shouldn't exist. It's wrong. It's ugly. It's FUN.

Then...once you've gotten over the initial extremes and discovering just how far you can reshape your beautiful obsession (or dodgy music in this case) you realise that what you have is a one-of-a-kind sculpting tool that with the deftest and lightest of touches reacts and interacts in ways that you learn and understand quickly.

All of a sudden you're stroking those knobs and counterbalancing your wilder dialings to create refreshingly unique, resonantly musical and inspiringly obtuse sonic layers with ease. And you create a beauty that is actually yours, and not just a layer of musical vanity.

Well...that was my take anyway :) Go on...squish and pinch your musicality into something new! 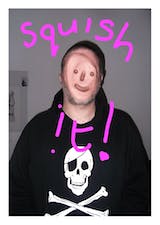 F
Frankie Armenta
This is one saucy boi

Midfi knows how to play with pin 6 of a pt2399 chip like the devil knows the fiddle, I’ll tell you what. This clari(dude) will put all the ladies in the clari(mood). Does wacky, does subtle, built like an 88 Corolla