The Wardenclyffe Mini is a lofi ambient modulator.  It emulates the magical lofi textures of early audio recordings. Inspired by Nikola Tesla's Wardenclyffe Tower, the pedal attempts to capture the essence of one of the most mysterious and odd scientists of the century. The Wardenclyffe Mini wears many hats:  it is a pitch modulator, vintage low pass, high pass filter, & ambient pad reverb. Depending on knob positions, it can be used subtly as a vibrato, chorus, or pad reverb... or by cranking the filter, depth, and wet knobs you can get into extremely nauseating lo-fi territory.   All elements combined, it provides all the tools you need to get that beautifully broken lo-fi texture you've been dreaming of.

I use this to turn my bass into a synth. Best filters I've ever heard and am very satisficed with the pad setting. Only thing that would make it better would be an expression jack

Super fun lo-fi pedal! Definitely not as feature packed as Gen Loss or its ilk, but it's a solid and fairly inexpensive alternative for anyone trying to make warbly filtered sounds, and/or create unique chorus or vibrato effects. Recommended!

I think this is low key one if the best Lofi pedals on the market. Very versatile pedal!

The Wardenclyffe is special. It's hard to find a bad setting if you're into lo-fi sounds.

Hype. Pedal-dom thrives on it. The eternal tone hunt. Maybe this one will sound better than that one.
End it. Right here and right now.

Hungry Robot have quietly run rings around almost every other creator of lo-fi inspired pedals with this thing, and the this 2nd version just refined what didn't really need that much refining! So why is it the greatest? Well...

- Independent levels for wet (effected) and dry signals...that alone means that at every micro turn of one of those dials you have a variance in what this pedal is doing...so combined between the two you basically have every single damned modulation variant you can create with a chorus-y offset signal. That's bonkers!
- hi-pass AND low-pass filters with dial-able mix level...the emotive power of the HP/LP filters cannot be underestimated, it is the lifeblood of the modern lo-fi musical genre in all forms as it lets you devolve your music into crinkly and warm tape sonics, or needle them into the vinyl-esque
- waveforms that are actually musically useful and believable...no infinite seasickness here, but two waveforms that allow for the sweet, sweet msuciality of chorus vibrato or the undefined randomness of warped vinyl or curled tape edges, both pitched to perfection
- a pad that's not a cliche...no really, with this toggle you activate a repeating granular reverb that sits where you place it in your hi-pass/lo-pass mix to create a space and ethearelity without taking over....it's a genius addition
- refined speed and depth...a staple of any chorus pedal, the trick here is a curve on each that is actually thought out and desinged to unlock via interaction a bevvy of useful and un-cliched sounds that can be easily found on the fly

I sit this alongside my ZVex ILJ on my board. It'll remain there, tiny as it is, for the foreseeable future as it has inspired so much creativity.
It's seen off a Chase Bliss Warped Vinyl 2 & Hi-Fi, Cooper Effects Gen Loss 1 & 2, Mid-Fi Pitch Pirate, Pladask Fabrikat and Fairfield Circuitry Shallow Water.

Probably the Greatest Single Lo-Fi Pedal on the Market. To me anyway.
Plug in. 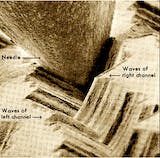